Stations of the Cross of Nonviolent Love 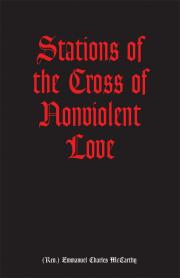 This booklet contains personally assimilable and livable meditations on specific dimensions of Christ's Nonviolent Love as he endures each of the 14 stations of the cross, emerging finally at 15th station, the Resurrection, having conquered evil and death.

In addition to a new cover, a color mosaic for each station has been added to accentuate the substance of each of the meditations. It is hoped that these meditations will help nourish the understanding that the Christian cannot desire freedom from the cross of Nonviolent Love because the Christian has been specifically chosen to reveal the power of the cross Christlike Love.

Nonviolent Love belongs to the mystery of the Redeemer and redemption. The test is whether one shares in that mystery...Christ has shown that nonviolence is strength. The effectiveness of nonviolence is ultimately the open tomb.

The War in Iraq and the Requirement of Moral Certainty 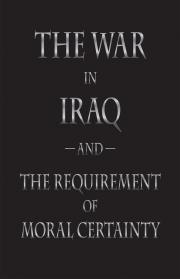 Recognizing that Catholic Just War Theory as well as Catholic Moral Theology have a certain amount of practical elasticity built into them, nevertheless, this can be stretched to the moral breaking point. That point has been passed long, long ago in relation to this War on Iraq. The past four years of dead silence as death madly rampages through Iraq is false witness on a grand scale by the U.S. Catholic Episcopacy. False witness to what? False witness to the Gospel and to the most fundamental and well-established tenents of the Catholic moral tradition. Emotionally a person could experience this War as morally repugnant, but this is not what I am speaking about. I am speaking about the public dismissal, the undermining and the bracketing out of incontestable norms of Catholic moral truth. Silence is a moral choice. Silence that implies to the average person moral acceptability is an even more serious moral decision. Silence by the official moral teachers in a diocese or Church where ordinary folks need and depend on these men for the proper orientation of their souls toward God in order to travel along the authentic path (Way) to salvation is a most serious form of pastoral neglect, especially where the destruction and mutilation of human life is involved.

My judgment is that the U.S. Catholic Episcopacy can "get away" with their calculated silence because most Catholics have not been taught, regardless of their level of education, e.g., Catholic University graduates, the spiritual seriousness and the cognitive truths that govern the application of Catholic Just War Theory and Catholic Moral Theology. This booklet is an attempt to open up this failure to consideration, as well as, to give concrete examples from the present and the past of the pastoral and personal tragedies that occur when Catholics are nurtured in utterly inadequate or outright erroneous understandings of Catholic Moral Theology and Just War Theory.