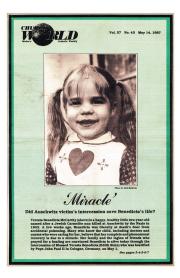 Teresia Benedicta McCarthy is a happy, healthy little two-year-old named after a Jewish Carmelite nun killed at Auschwitz by the Nazis in 1942. A few weeks ago, Benedicta was literally at death's door from accidental poisoning. Many who know the child, including doctors and nurses who were caring for her, believe that her complete recovery is due to a miracle. Her family and the legion of friends who prayed for a healing are convinced Benedicta is alive today through the intercession of Blessed Teresia Benedicta (Edith Stein) who was beatified by Pope John Paul II in Cologne, Germany on May 1, 1987.