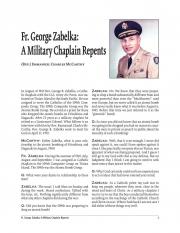 In August of 1945 Rev. George B. Zabelka, a Catholic chaplain with the U.S. Army Air Force, was stationed on Tinian Island in the South Pacific. He was assigned to serve the Catholics of the 509th Composite Group, which was the Atomic Bomb Group. In that capacity he was the priest for those who dropped the atomic bombs on Hiroshima and Nagasaki. After 22 years as a military chaplain he retired as a Lieutenant Colonel.