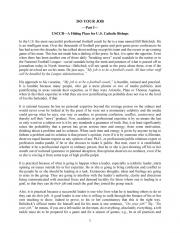 In the U.S. the most successful professional football coach by far is a man named Bill Belichick. He is an intelligent man. Over the thousands of football pre-game and post-game press conferences he has had across the decades, he has talked about nothing except his team and the recent or up-coming game of his team. This has not made him a darling of the press. In fact, it is quite the opposite. Even when there has been another one of those daily “breaking news” social scandals in the nation or in the National Football League—social scandals being the meat and potatoes of what is passed off as journalism today in North America—Belichick will not speak to the press about them, even if the people involved are on his team. He just says, “My job is to be a football coach. All that other stuff will be handled by the League Administration.”

His approach to his vocation, “My job is to be a football coach,” is humble, rational and practical. It is humble because many people, who get a mere photon or two of media publicity start pontificating in areas outside their expertise, as if they were Aristotle, Plato or Thomas Aquinas, when in fact their expertise in what they are now pontificating on probably does not rise to the level of Joe the bartender, if that...