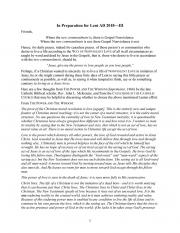 Hence, the daily prayer, indeed the ceaseless prayer, of those person’s or communities who desire to live a life according to the Way of Nonviolent Love of all in all circumstances as taught by word and deed by Jesus in the Gospels, that is, those who desire to live in accordance with the new commandment, should be,

Perhaps, if a Christian wanted to sincerely try to live a life of Nonviolent Love in imitation of Jesus, he or she might commit during these forty days of Lent to saying this little prayer as continuously as possible, as well as, to saying it when tempted to think, say or do something contrary to loving as a Jesus loves.

Here are a few thoughts from The Power and The Wisdom (Imprimatur, 1966) by the late Catholic Biblical scholar, Rev. John L. McKenzie, and from the Catechism of the Catholic Church that may be helpful in discerning whether to choose the above mentioned Lenten effort.

From The Power and The Wisdom:

The pivot of the Christian moral revolution is love [agapé]. This is the entirely new and unique feature of Christian moral teaching; it is not the center of a moral structure, it is the entire moral structure. No one questions the centrality of love in New Testament morality; it is questionable whether Christians have always grasped how different it is and how total it is. I venture to state its totality by saying that in the New Testament and Acts, that which is not an act of love, has no moral value at all. There is no moral action in Christian life except the act of love.

Love is the power which destroys all other powers, the love of God revealed and active in Jesus Christ. God revealed in Jesus that He loves man and will deliver him through love and through nothing else...Ultimately man is proved helpless in the face of the evil which he himself has wrought. He has no hope of recovery or of survival except in the saving act of God. The saving act of Jesus is an act of love of the type which He recommends in the Gospels. He loves God by loving His fellow men. Theologians distinguish the “God-ward” and “man-ward” aspects of the saving act; but the New Testament does not use such distinctions. The saving act is all God-ward and all man-ward; it moves toward God by moving toward man, as Jesus tells His disciples they also must do. And He leaves no room for man to move toward God except through his fellow man.

This power of love is seen in the death of Jesus; it is seen more fully in His resurrection.

Christ lives. The life of a Christian is not the imitation of a dead hero—and it is worth noticing that it can become just that. Christ lives. The Christian lives in Christ and Christ lives in the Christian. The New Testament speaks of love because it rises out of an uncreated love. It is the one enduring reality in the created world, and in it man achieves enduring reality and value. Because of this enduring power man is enabled in any condition to live the life of Jesus and to continue in his own person the love, which is the saving act. The Christian knows that his love is the active presence and power of God in the world; if he lacks it he takes away God's presence from the only place where he can put it. He has come between his neighbor and the saving love of Jesus Christ. The morality of reason and nature is not the morality which continues the life of Christ.

The law-abiding citizen, like the criminal, will be saved only by the love revealed by Jesus in the Gospels. He has to be taught the meaning of that love by experiencing it.

From The Catechism of the Catholic Church on Jesus' new commandment: