Voting: A Charade of Hope 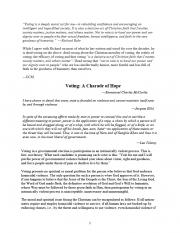 “Voting is a deeply moral act for me—in rebuilding confidence and encouraging an intelligent and hope-filled society. It is also a decisive act of Christian faith that I matter, society matters, justice matters, and others matter. Not to vote is to hand our power and our dignity over to people who fear actual freedom, honest intelligence, and faith in the very goodness of humanity.”

While I agree with Richard on most of what he has written and stood for over the decades, he is dead wrong on the above: dead wrong about the Christian morality of voting, the reality of voting, the efficacy of voting and that voting “is a decisive act of Christian faith that I matter, society matters, and others matter”. Dead wrong that “not to vote is to hand our power and our dignity over to people” who are less intellectually honest, more fearful and less full of faith in the goodness of humanity than ourselves.

Voting: A Charade of Hope

I have shown in detail that every state is founded on violence and cannot maintain itself save by and through violence.

In spite of the unceasing efforts made by men in power to conceal this and to ascribe a different meaning to power, power is the application of a rope, a chain by which a person will be bound and dragged along, or of a whip, with which he will be flogged, or of a knife, or an axe with which they will cut off his hands, feet, ears, head—an application of these means or the threat they will be used. Thus, it was in the time of Nero and of Genghis Khan and thus it is even now, in the most liberal of governments.

Voting in a governmental election is participation in an intrinsically violent process. This is fact, not theory. What each candidate is promising each voter is this: “Vote for me and I will put the power of governmental violence behind your ideas about virtue, right and goodness, and force people under threat of pain or death to live by them.”

Voting presents no spiritual or moral problem for the person who believes that God endorses homicidal violence. The only question for such a person is when God approves of it. However, if one happens to believe that the Jesus of the Gospels is the Christ, the Son of the Living God, the Word of God made flesh, the definitive revelation of God and God’s Will to humanity, whose Way must be followed by those given faith in Him, then participation by voting in an intrinsically violent process is unacceptable, unnecessary and unmeaningful.

The moral and spiritual issue facing the Christian can be encapsulated as follows: If all nation-states require and employ homicidal violence to survive, if all human laws are backed-up by enforcing clauses, i.e., by the threat and willingness to use violence, even homicidal violence if necessary, to get done what they want to get done:

and if it is morally impermissible for a follower of Jesus to enlist another human being to execute an evil which the disciple of Jesus is morally prohibited from doing, then is not a Christian betraying his or her baptismal commitment by voting for other people—presidents, legislators, judges—to do on his or her behalf what the Christian him or herself is forbidden to do, that is, use homicidal violence against another son or daughter of God?

Daniel Berrigan, S.J., said on many occasions, “If people think they can participate in major league politics and be Christian, they either don’t know what major league politics is or they don’t know what Christianity is.” Homicidal violence is the built-in modus operandi of governmental politics. However, it is only the most blatant inconsistency between Jesus’ Way and the way of the “raging nations.” Lies, fraud, CIA-Mossad-MI 6 black opts operations, greed and enmity are as ineradicably tied to governmental politics as homicidal violence is. As Carl J. Friedrich, former Eaton Professor of Government at Harvard University writes: “Our analysis has, I hope, shown that politics need all these dubious practices; it cannot be managed without violence, betrayal, corruption, secrecy and propaganda.”

The Christian has no more business selecting the best or the most “Christian” homicider, deceiver, black-ops leader or powermonger, than he or she has in selecting the best or the most Christian prostitute or most Christian Mafia Godfather. This should be blatantly self-evident. Voluntary participation in such processes legitimates and empowers spirits that are innately and irreversibly hostile to the mission of Jesus and hence to the salvation of humanity. Voting for who can best activate these diabolical powers on behalf of “my cause” is an enterprise that no follower of Jesus should be party to.

For the Christian, there is no hope outside of the Will of God as revealed by Jesus. All of the Christian’s hope must be placed in Jesus and His Way–even if the powers of this world and the wisdom of this world dismiss and demean His Way as folly. Why this exclusive commitment to Jesus and His Way? Because Jesus is God incarnate and hence His Way is “the power and the wisdom of God” (1 Co 1:24). His Way is Reality! For the Christian to participate in what Jesus explicitly rejects as God’s Will and Way is for the Christian to waste his or her life on an illusionary hope. It is to dribble away existence in the service of “the sound and the fury signifying nothing”—or worse.

The Christian knows that his or her final judgement rests and the salvation of all humanity rests on using every means available to serve suffering humanity (Mt 25: 31)—every means that is consistent with the Way of Jesus. But the Christian also knows, should know, that evil can never and will never serve the salvation of the individual or the salvation of humanity or entrance into Communion with God. This is true regardless of all the governmental, religious and mass media lies about the realities of governmental politics and all the governmental, religious and mass media brainwashing into deceitful myths of sacral, noble, heroic, necessary and good governmental violence notwithstanding.

The Nonviolent Jesus of the Gospels authorizes, indeed commands, no disciple of His to substitute—even for a second—violence for loving as He loves (Jn 13:34, 15:12). If the Nonviolent Jesus of the Gospels is the Messiah, the Christ, the Son of the living God, the Word of God made flesh, then not a single act of violence is needed for any person and for all humanity to “be all they can be.” Indeed, any voluntary participation in an act of violence, whether it be personal, commercial or governmental is radically hostile to a person or to all humanity reaching the goal of “being all they can be.” So, says the Nonviolent God Incarnate, the Nonviolent Jesus Christ. He may be wrong—in which case He would not be the Messiah or God—but He is not unclear.