Reclaiming Jesus But Not the Nonviolent Jesus of the Gospels 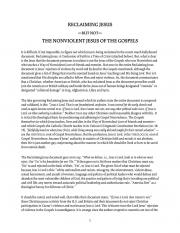 It is difficult, if not impossible, to figure out which Jesus is being reclaimed in the recent much-ballyhooed document, Reclaiming Jesus: A Confession of Faith in a Time of Crisis (attached below). But, what is   clear is the Jesus that the document presumes to reclaim is not the Jesus of the Gospels who was Nonviolent and who teaches a Way of Nonviolent Love of friends and enemies. Not once in the entire Reclaiming Jesus document is Jesus’ rejection of violence by word and by deed in the Gospels mentioned, although the document gives a list of things that must be rejected based on Jesus’ teachings and His being Lord. Nor is it mentioned that His disciples are called to follow Him and reject violence. So, the document communicates that a Christian, whether American or British, who has reclaimed Jesus as the document prescribes could join the American or British military and bomb the be-Jesus out of human beings designated “enemies” or designated “collateral damage” in Iraq, Afghanistan, Libya and Syria.